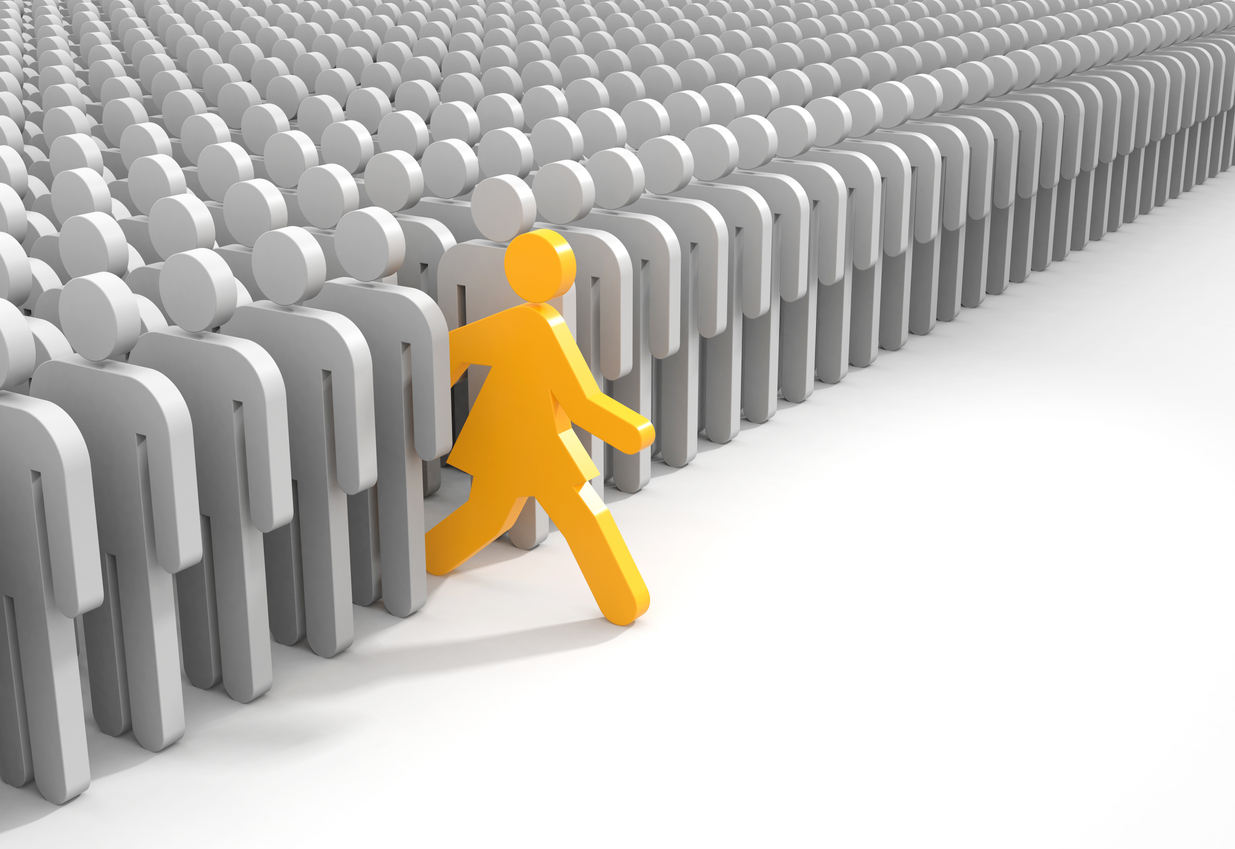 Some people believe that once they achieve an executive role – when the word ‘executive’ is on their business card – they automatically become a leader via the power of their position, regardless of their actual leadership skills. A sign of a poor leader that many people have shared with me is when you speak with them, you walk away feeling like they were talking “at you”, not “with you” or “to you”. Or if they do check in with you, it can feel disingenuous, like they were ticking the box, rather than offering genuine engagement.

There is nothing automatic about true leadership. Leadership has nothing to do with a job title, and you do not have to hold an executive role to be a leader. Leadership is the ability to inspire and motivate people, and to demonstrate the way forward.

You can recognise true leaders by their willingness to openly share their views, strategies, and beliefs – they value transparency and unfiltered communication. In turn, they value and listen to the views of others. Great leaders welcome and embrace passion, creativity, and the willingness to innovate. They understand the importance of inclusivity and diversity, knowing that a broad range of views and backgrounds brings a broader range of ideas and solutions.

True leaders push the envelope. They seek out great people and nurture talent, often with the desire to see other, future leaders step forward. They create opportunities for collaboration, feedback, and testing, and encourage their teams to challenge one another in a positive way. In short, they create a positive environment in the workplace that is almost contagious. That culture becomes one of the most attractive features of working for the organisation.

Any organisation that can fill its executive roles with skilled leaders will see an amazing transformation in terms of employee satisfaction, workplace culture, customer service, business reputation and increased revenue. It’s when you have that combination of the two – an executive leader – that you see companies transform.

When you think of leaders, better yet, courageous leaders showing the way forward, who comes to mind?

I am going to share a few, that I shared in my book, ‘Risk Starts And Ends With People’, but I am also looking out for our courageous leaders for tomorrow. We need you to show up, we are ready for you.

When you think about inspiring and disruptive leaders of our time, Richard Branson, has been one of the world’s most inspiring leaders. Industry Leaders magazine summed up his achievements as, ‘a remarkable leader with soaring desire to kindle the moral fibre of leadership in many lives, chairman of over 400 companies, a philanthropist, investor, and a business magnate.’

What’s his secret? He operates an open-door policy to everyone in his organisation and is willing to listen to anyone who works for him. As Derrick Diksa puts it, ‘How empowering would it be to know you could go to the top of the organisation to give your opinion directly to the CEO without fear of repercussion?’

Richard is known for many quotes, but one that has always resonated with me is, “Clients do not come first. Employees come first. If you take care of your employees, they will take care of the clients.”

Leaders who know how to pick up the pieces to rebuild

A great example of the importance of connecting with employees to support a rebuild of a corporate brand with integrity, look no further than the Campbell’s Soup story. It shows how one leader, willing to stand by his convictions, completely turned a company around.

In 2001, Campbell’s was struggling. Sales were on a downward slide, thanks to a decision to raise the prices of the iconic canned soup, and the company’s market value had halved. Doug Conant decided to take the role of CEO at Campbell’s, leaving his previous position as president of Nabisco Foods Co. Conant had a strong belief in employee engagement and he wasn’t afraid to implement it, developing a ten-year plan to turn the company around.

Sensing resistance from his leadership team, Conant made sweeping and controversial changes. He replaced 300 of the company’s top 350 leaders in his first few months. This made a huge statement, not only to the employees, but also to the market. It demonstrated Conant’s commitment to far-reaching change. He had a motto: ‘To win in the marketplace, you must first win the workplace.’ He understood the need to connect with people and build confidence and trust through his approach and actions.

Did his gamble pay off? It certainly did. After completing his ten-year plan, Conant retired in 2011 with an impressive record: Campbell’s stock had outperformed the Standard & Poor’s Index. During that time, Campbell’s also won the Gallup Great Workplace Award four times and a Catalyst Award for advancing the careers of women in the workplace.

Let’s step away from the private sector for a moment to look at a leader in the political arena. Whether or not you agree with her policies, New Zealand Prime Minister Jacinda Ardern has made headlines around the world for her leadership style, especially her compassion and vulnerability after the Christchurch terror attack on two mosques, which saw fifty-one lives lost and many injured.

In a time of pain and suffering, and with the potential for escalating violence and division of the community over the attack, Ardern broke down many barriers when she hugged victims, wearing a black headscarf as a simple show of respect. A few days later, when she addressed New Zealand’s Parliament, she made a small but bold statement by opening her remarks with the Islamic greeting ‘As-Salaam Alaikum’ and gave a unified cry, ‘They are us.’

Ardern’s actions and willingness to be vulnerable helped to unite communities, cultures and the whole country and demonstrated the importance of mourning together. Biographer Madeleine Chapman shared, ‘Her grace and compassion following the Christchurch mosque shooting captured the world’s attention. Oprah Winfrey invited us to “channel our inner Jacindas” as praise for Ardern flooded headlines and social media.’

Ardern herself uses various social media platforms to connect directly to people. She has used Facebook Live to read letters and questions she has received from community members and to clarify messages from her government. During the COVID-19 pandemic, she explained details about her government’s COVID response. Reaching out to real people in this way demonstrates that for Ardern, communication is a two-way street and creating connection through vulnerability is a strength. In 2021, Ardern’s leadership was recognised as she topped Fortune magazine’s world’s fifty greatest leaders.

Bridging to the next gen leaders

At fifteen years of age, a Swedish student and environmental activist caught the world’s attention when she challenged world leaders to take immediate action against climate change.

Greta Thunberg began her protest by sitting outside the Swedish parliament on school days, holding a sign that read Skolstrejk för klimatet (‘School strike for climate’).

She was soon joined by other students and began an organised school climate strike called Fridays for the Future. A few months later, she was addressing the United Nations Climate Change Conference, inspiring millions of students across the globe to join protests. Student strikes took place every week somewhere in the world.

Greta is a straight shooter, voicing what many are reluctant to say. She is a perfect example of a leader who is not an executive or politician, and she was not even an adult when she started. You don’t need to be any of these things to be a leader, you just need to have a vision, passion, voice, and a plan.

How do leaders show up

What do all these leaders have in common, they show up as themselves, their title may be their job function, but it doesn’t define them. What defines them as leaders is the way they show up, as passionate people, wholeheartedly and often being vulnerable. But each person understands, respects, and believes the power of people.

Each person is vastly different, but each knows how to connect and inspire people to go on the path and they enable and support those people that travel their path. And they help to support others showing courage to become leaders.

Now the examples of the leaders I have mentioned are all well known, and we can take many learnings from each; but I am looking for the courageous leaders who are not well known. Do you know any? If so, share their story with me.

Join me for a ‘Courageous Leadership’ event

On 21st April I will be co-hosting a Courageous Leadership online event with a ‘Courageous Leader’ I know, Carolyn Butler-Madden, Chief Purpose Activist, from The Cause Effect.

We are inviting organisational leaders and influencers to answer the call to leadership and understand how they can start showing up as the courageous leaders that our workplaces, communities and societies need and deserve. We will be sharing insights on other courageous leaders not mentioned above.

Let me leave you with one question until you join us at the event. If you could have a dinner party with your top eight courageous leaders of past, present, and future, who would be on your invitation list?

Can’t wait to hear who is on your list. So come, join us; we would love you to join us.

The posts you requested could not be found. Try changing your module settings or create some new posts.